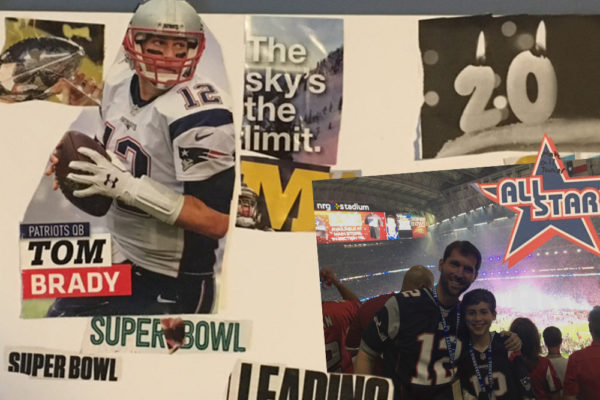 Carpe diem is Latin for, “Seize the day.” It’s defined as, “To make the most of the present time and give little thought to the future.” I can’t think of a better way to describe how my son and I were able to attend the historic Super Bowl LI together.

A few weeks back, I was given the opportunity to attend the Super Bowl for the first time. My instinct was to stay at home and avoid the chaos, but the historical implications of the game got the better of me. My oldest son, whose bedroom is a shrine to Tom Brady, also gave me a lot of subtle (and not-so-subtle) hints of how much he 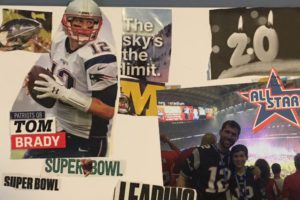 wanted to go with me. He had actually prominently featured a picture of Tom Brady holding the championship trophy on his vision board, which each family member created for themselves New Year’s Day.

In the weeks leading up to the game, he had numerous dreams about the Super Bowl. He’d share them with me in the morning and most of them included him being at the game. Something in the back of my mind told me that this was an experience we should have together, so I started looking around for a ticket for him. No luck. Then, a few days before the game, a ticket became available. However, when I went to check for flights, they were all sold out.

As I said my goodbye to him on my way to the airport Saturday morning, I gave him a hug and told him that I was sorry it didn’t work out and that perhaps it just wasn’t meant to be (something an 11-year-old really doesn’t want to hear).
As I sat in the airport waiting for my flight, something prompted me to check the Delta app one last time for our return flight (which was sold out early in the week). Suddenly, a low-level award ticket was available –the last seat on the plane. I called Delta and they said I could take it and have 24 hours to cancel.

I then searched for Sunday morning flights and there was only one direct flight that arrived before the game. Incredibly, the same 24-hour rule applied, so I quickly purchased both tickets and called my wife to tell her the news, although I still didn’t have a game ticket for him. When I spoke with my son I said, “Bud, it’s a longshot. I can get you to Houston, but we still need to get you a game ticket. And, you’ll need to fly by yourself tomorrow morning on a four-hour flight.” This was something he had not done before.  Without hesitation, he said he would do it. His mom, however, was not so sure.

Understandably, she was not thrilled that I had blown up everyone’s plans for the weekend and she would have to get him to the airport by 6:45 AM, wait for him to take off and find someone to watch our other kids. It was a lot to ask.

In the meantime, on my flight to Houston, I contacted everyone I knew in my EO Network and, to my surprise, could secure him a very reasonable ticket to the game. Everything was falling in to place. However, as I sat in the Houston airport ready to make the final call to purchase his game ticket, I thought to myself, “This is nuts. He’s 11 and this is totally unnecessary. Heck, I am 41 and this is my first Super Bowl. We should wait, there will be other opportunities.” Honestly, I was seconds from calling the whole thing off.

Suddenly, I thought back to a Friday Forward, I had written just a few months back about regret. The quote I chose to include at the end was, “We only regret the chances we didn’t take.” If I threw in the towel now, I’d be a hypocrite. So, I called my wife and said, “I am sorry for the work this puts on you, but let’s do it, I just have a feeling about this.”

Unless you are reading this from Mars, you know the end of the story. My son and I, along with his grandfather, got to witness the greatest Super Bowl game and comeback in history. What’s more is that we had an experience that none of us will forget. One day, I hope to tell my grandkids about being at the game with their dad where we saw the Edelman “ankle catch” and where Tom Brady and Bill Belichick broke the NFL records.  And if that wasn’t enough, we even made the evening news as we got off the plane in Boston.

I can tell you with absolute certainty that, had the Patriots lost the game, I would have had no regrets. It would have stung, but the experience itself would have been worth the trip. We actually talked about that as the game headed into the fourth quarter. But had I known I had the opportunity and decided to pass on it, that certainly would have haunted me for years. Regret, really, is rarely about what we do. It’s about what we don’t, should have or didn’t do.

In my eyes, the real hero in this story is a very determined 11-year-old who had a vision and was committed to seeing it through. Then, when presented with the opportunity of a lifetime, he got over any fears he must have had, got on that plane and seized the day. That’s a valuable lesson for all of us.

“At the end of the day, let there be no excuses, no explanations, no regrets.”