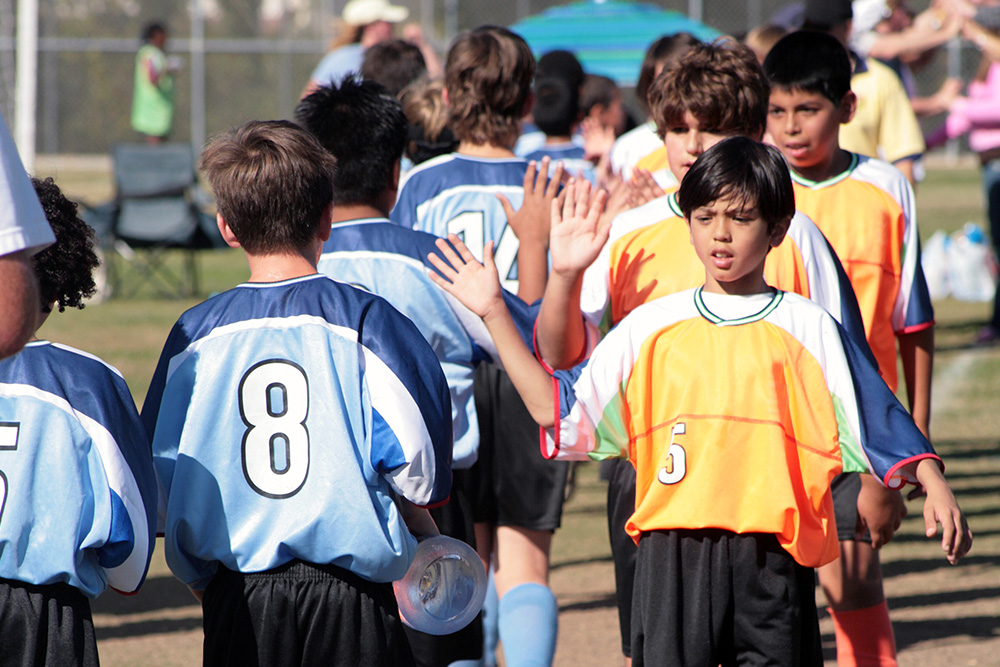 A few weeks back, my son’s soccer team was playing a run-off game for the final playoff in the division. They had a big lead and, as the time wound down, the other team was starting to get frustrated and rather “chippy.” One kid in particular had locked into some one-on-one challenges with my son, who is mild-mannered and often plays the role of peacemaker.

Ultimately, my son’s team won and, as the teams lined up to do the sportsmanship handshake, this kid refused to shake hands with my son and others.  Instead, he walked away with a one-fingered gesture in their direction.

Not a great sport.

Based on my experiences, I am going to guess that he is the child of parents who also do not demonstrate good sportsmanship. What I have observed time and again in youth sports is that the apple doesn’t fall far from the tree. Sadly, many parents today put winning above character.

Competition is a vital part of achievement and outperforming. In fact, the word “compete” comes from the Latin word competere which means “strive together.”  Yet, this concept tends to be misunderstood and underappreciated.

The reality is that we regularly compete in most aspects of our life. We compete for jobs we want, college admission spots, and for new clients and employees.

Unlike the boy my son played, Ty Koehn understands the essence of competition and character. Koehn is a high school pitcher in Minnesota. Last week during the sectional championship game, he struck out his best friend and competitor, Jack Kocon. This final strike advanced Koehn’s team to the state tournament.

As his team rushed to the pitcher’s mound to celebrate, Koehn immediately headed to home plate and gave Kocon a big hug before joining his teammates in celebration, as you’ll see in this inspiring video.

When asked about his reaction, Koehn said that he wanted his friend to know their friendship was more important than the outcome of the game.

The scene reminded me of a video I saw a few years back of a softball player named Sarah Tucholsky. Sarah had hit a three-run home run, the first in her college career, but she had missed making contact with first base on her first go-round. As she ran back to tag first base, she tore her ACL.

As per official rules, none of Tucholsky’s teammates could assist her in running the bases, which she couldn’t do because of her injured knee. The umpires also pointed out that Tucholsky’s hit would only count as a two-run single if she were replaced by a pinch runner.

What happened next was one of the most incredible acts of sportsmanship I’ve ever seen. It’s actually hard to watch this video without getting emotional.

Competing is about elevating our own game. It’s about practicing, getting better and having the will to win as a team. Instead of winning at all costs or wishing failure on others, real winners always prioritize character over winning itself. True sportsmanship requires that we know how to win well and be gracious in defeat.

“The key difference between winners and losers is how they win and lose.”