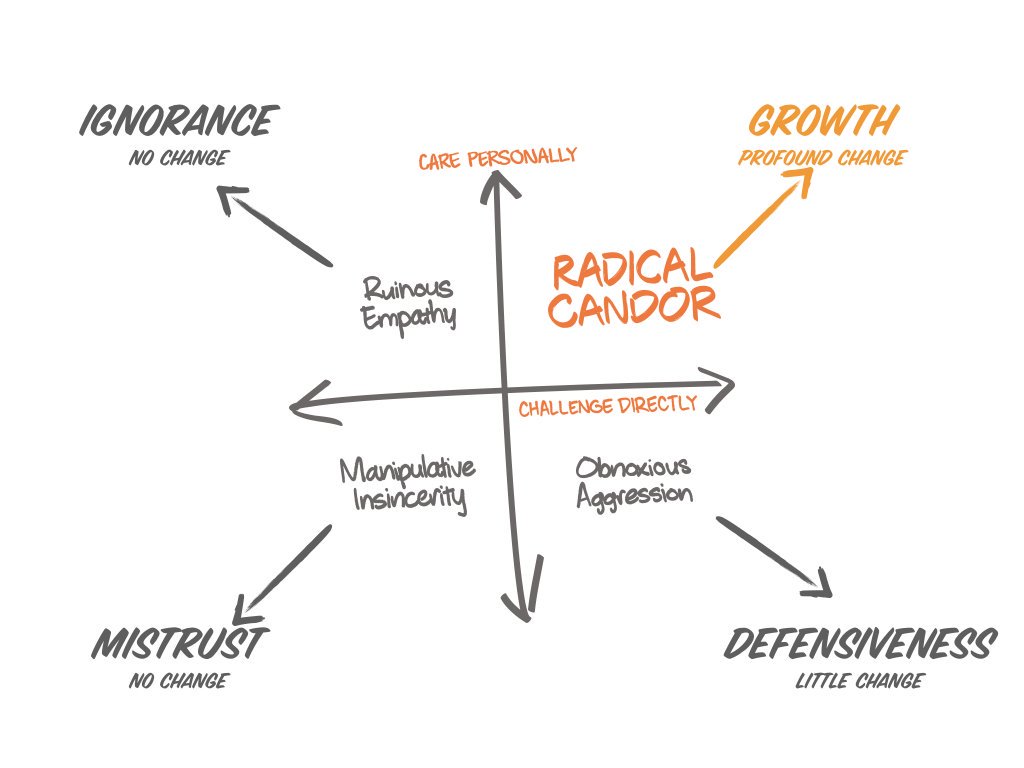 In her first major leadership role at Google, Kim Scott and her then boss, Sheryl Sandberg met with the founders and CEO to present the results from a campaign Kim and her team developed. The numbers were so remarkable, CEO Eric Schmitt almost fell off his chair in disbelief and then peppered her with questions about how they could best support her team.

Understandably, she emerged from the meeting feeling really good about herself and how it had gone.

On her walk back to her office, Sandberg praised Kim and told her the things she had done well in the presentation. She also noted that Kim used the filler “ummm” a lot and asked her if she was aware of that. Kim brushed it off a few times as a verbal tick to which Sandberg responded by looking her right in the eye and saying, “Kim, when you say ‘ummm’ every third word, it makes you sound insecure and stupid.”

While some would say this feedback was harsh, Kim would disagree. Sandberg did not say that Kim was stupid, she said using “ummm” too often made her sound stupid and undermined her credibility and intelligence.

The way in which Sandberg gave Kim this feedback was both caring and direct, a term that Kim went on to coin “radical candor.” Kim knew that Sandberg genuinely cared about her and that her feedback was coming from a place of wanting to help her excel and improve; it was not a personal attack.

Kim took Sandberg’s advice, went on to work with a speech coach and is now a sought-after keynote speaker and author of the bestselling book Radical Candor—The Surprising Secret to Being a Good Boss.

She also started a company that helps leaders and companies implement Radical Candor in their organization through talks, workshops, and coaching.

And Sandberg, of course, went on to become COO of Facebook.

I was reminded of Kim’s story when I read a recent ESPN article about Boston Celtics coach, Brad Stevens. Despite losing their two best players, the Celtics are playing strong through the playoffs and Stevens is quickly making a name for himself as one of the best coaches in professional sports today. Here’s how the ESPN writer describes how he addresses player mistakes:

“In evaluating players, both during games and in film sessions, Stevens is careful with language, according to coaches, players and team higher-ups. He focuses on actions: We didn’t get this rebound. You should have made this rotation earlier. The criticism is never about the player’s character. No one is labeled lazy or stupid or selfish. Stevens simply describes what did or did not happen, and what should happen next time.”

The purpose of feedback should always be for the receiver to get better—not for the giver to feel better.  Too often, we fail to give our employees, friends and family the feedback that they need to hear because we are afraid to have the tough conversation.

If you aren’t meeting this standard, then you are likely falling into one of the other three feedback quadrants that Kim outlines in her book and her training: Obnoxious Aggression, Ruinous Empathy or Manipulative Insincerity. Each have major downfalls.

I was extremely fortunate to be able to sit down with Kim Scott on my Elevate Podcast to hear her story and learn more about how we should both give and receive candid feedback.