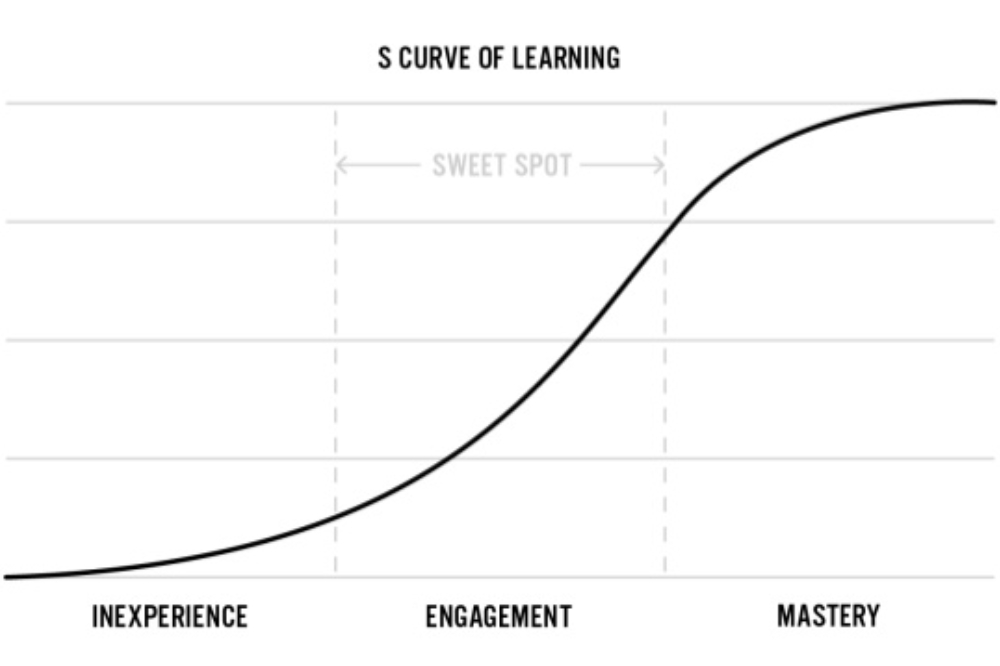 Many of us have seen a diagram of the adoption curve of a new product, which resembles a tilted S and has a few different phases.

The first part of the curve has barely any slope, as the product appeals only to a small number of early adopters. Then the curve gets much steeper as exponentially more people adopt the product, and it reaches mainstream popularity. Finally, that growth flattens out once again as the product reaches maturity and fewer people want or need it.

According to Whitney Johnson, researcher and bestselling author of Disrupt Yourself, our professional progress in a given competency resembles this same s-curve—and progresses through these same stages.

When we are learning a new skill, or adjusting to a new professional role, our progress is slow at first—we are at the bottom of the s-curve. Then, we reach the middle of the s-curve, where our progress accelerates; once we have laid a learning foundation, we begin to grow exponentially toward mastery. It’s often during this period of acceleration that we do our best work, experience the fastest growth and are most engaged. We know enough about what we are doing to have confidence, but not so much that it has become blandly automatic. 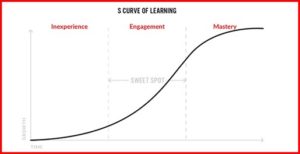 As we approach the mastery phase of our personal s-curve, our learning rate decelerates. While we accomplish things more automatically and with competence, Johnson contends that our brains are now producing less of the positive neurotransmitters that powered our growth—the thrill of learning has faded.

Most of us are familiar with the feeling of reaching a point in our career, or within a professional role, where we are no longer learning and growing. The irony is that mastery very often looks more impressive from the outside than it feels from the inside.

The only way to break this lull is to disrupt ourselves, either by moving onto a new role, or by pushing ourselves to master a new skill or changing our existing role so that it has new challenges. Doing this puts us on a new s-curve and accelerates our rate of learning once again.

While some people love jumping from curve to curve, and do so willingly, doing so is scary for most people. This is why the impetus to change often comes from the outside and not from within. Why go back to the base of a mountain when you have just reached the top?

Sadly, it often takes losing a job, being recruited away to another workplace or being offered a new opportunity within an organization to push us to a new s-curve. This is where leaders play a crucial rule. If you aren’t helping your best people make this leap, especially when they want to step up, or are showing signs of a plateau, you are at risk of losing them to a competitor or seeing a decline in their performance within your organization.

It’s important to note that you don’t have to take a new job to get on a new s-curve. This growth can just as easily come from a new challenge within an existing role, such as a new team to manage, a new product to launch, or a new market to enter.

This week, take a few minutes to think about where you might be at the top of an s-curve. Then, consider what you can do to jump to a new curve, and who might help you get there.

You might also want to check out my great conversation with Whitney on s-curves and leadership on her Disrupt Yourself Podcast.

“As our learning crests, should we fail to jump to new curves, we may actually precipitate our own decline.”