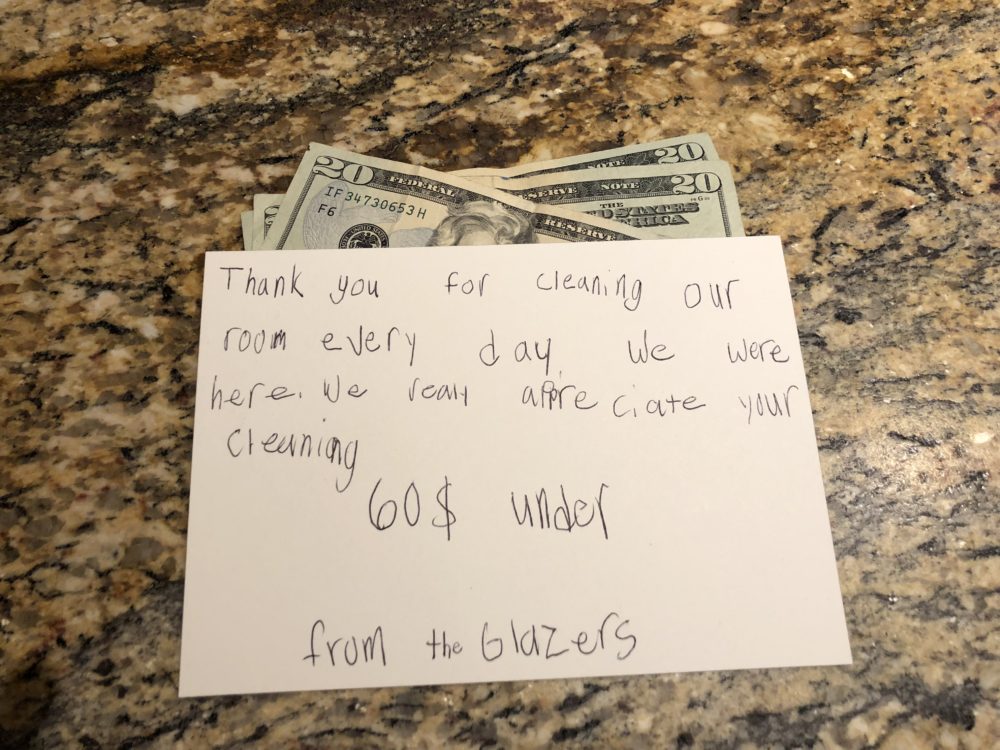 A few years back, my family and I started implementing a practice that was recommended to me by a mentor of mine, Warren Rustand. His advice was, after your stay at a hotel had come to an end, leave a handwritten note thanking the person who cleaned your room along with a monetary tip.

There are many reasons why this is a good thing to do, but three in particular are:

We travel a lot and when we stay at a hotel, my kids typically take turns writing the notes. But it is my youngest who has really come to enjoy it. Even though he’s only nine, he asks to write the note as we’re packing up to leave.

A few weeks back, we were on a ski vacation. We had a lot of gear and rushed out of our room each morning to hit the slopes. To say we left a mess would be an understatement. Yet, when we returned each afternoon, the room was cleaned very well and all our belongings were neatly organized. It must have taken the housekeeping person well over an hour each day to get it that way.

When we went to check out, my son asked to write the thank you note and I pulled $40 out of my wallet to leave as a tip. My wife, Rachel, looked at me and said, “We should leave more. She worked really hard.” As usual, she was right and so we did. 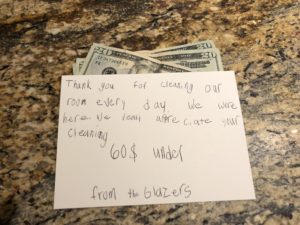 At almost the same time, I received a note from a friend via a What’s App group. He too was inspired by Warren’s advice and had begun leaving a tip with a thank you note after his hotel stays. He shared that after a recent stay at an Airbnb in Guatemala, he’d left a $15 tip each day to the person who had cooked and cleaned for them. To his surprise, he received a note from the owner a few days later that read:

“I want to thank you so much for being so generous with Sandra’s tips. She told me today she was able to take her child to the dentist and to de-parasite her other child from amoebas. It really made a difference, thanks for your generosity.”

Later this year, during winter break, I got back to our hotel room on Christmas Day just as the housekeeper was leaving. I did not have time to write a thank you note, so I handed her a $20 and said “Merry Christmas.” She looked at me and said “thank you” very sincerely and then said ” and thank you from my family”. It was the most fulfilling $20 I spent that trip, clearly it was meaningful and it wasn’t her first choice to be working on Christmas.

In our haste, we often neglect to show appreciation for the little things or take the time to thank and acknowledge those who have served us. And the reality is, these individuals are likely far less fortunate.

We’re all guilty of focusing on our first-world problems and overlooking the challenges/circumstances of others.

When we take the time to think about and recognize those who have served us in some way, with nothing to gain from doing so, it has a positive impact that is greater than we can imagine.  I also believe it’s simply good karma.

As you head into your weekend, I encourage you to take the time to sincerely thank someone who’s done something to serve you and see if you can improve their life in some small way. It’ll very likely make a difference to them and, as a bonus, it’ll also likely make you feel good about yourself.

A relatively small gesture can make a real difference in the life of another person.