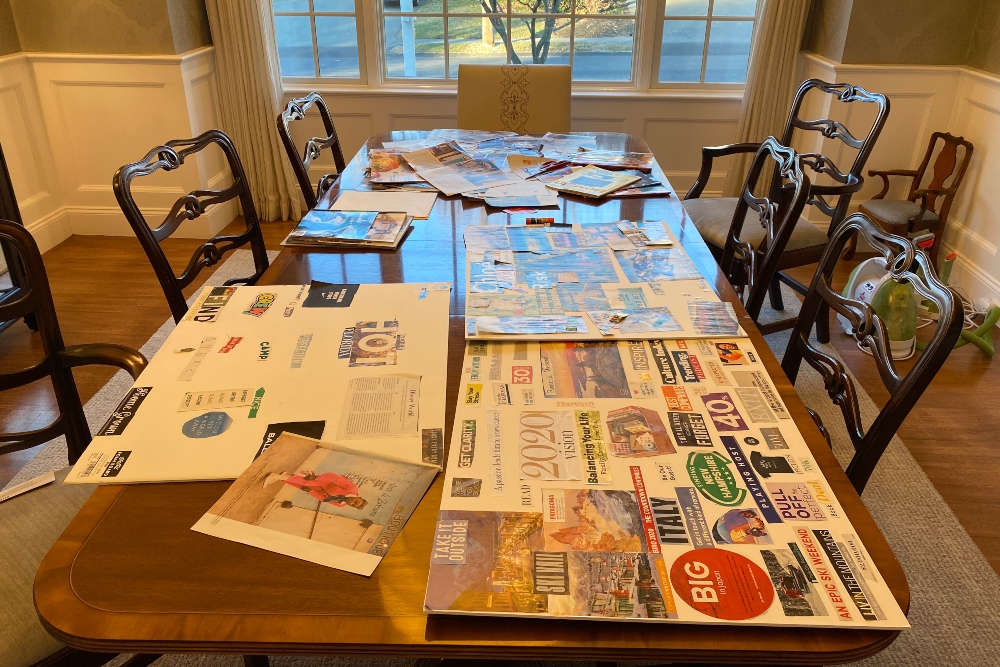 Five years ago my family and I began a tradition of creating vision boards near the start of each year. When I first heard of the concept of a vision board, I must admit I shrugged it off as a silly idea from Oprah Winfrey somebody shared with me.

But a few years later, another friend shared what a powerful exercise it had been for his family, which made me reconsider the idea. I also considered that Oprah, who became a self-made billionaire after growing up in poverty, was probably worth listening to regarding self-actualization. Turns out she was.

For kids, the vision board adds a creative, visual aspect to goal-setting, making a positive life habit into something fun and tangible. For couples, it’s a great way to make sure you are literally “on the same page,” for the year.

The process is simple. We buy a bunch of magazines, glue sticks and foam boards and lay them all out on a table. Then each of us chooses and cuts out pictures and words that represent our goals and “dreams” for the upcoming year.  Then, each of us puts our complete board in our bedrooms as a constant reminder of what we’re pursuing.

It’s very similar to our Vivid Vision process at Acceleration Partners, a detailed outlook of what the company will achieve in the next three years, and what environment we will build for current and prospective employees. We just successfully completed our 2020 Vivid Vision and are now embarking on one for 2023.

Creating vision boards helps tap into the Law of Attraction. This concept was popularized in Napoleon Hill’s Think and Grow Rich and refers to our ability to attract the things we focus on into our lives. Hill’s principles came from studying the habits of many of the most successful people of his era, and the book has sold 100 million copies worldwide since its publication in 1937.

Even if you don’t believe in the law of attraction, changing our awareness can make a difference in what we see and do. For example, anybody who has bought a new car has probably realized they suddenly notice that same model of car on the road a lot more, a direct result of heightened awareness. My experience is that increased awareness of an objective leads to regular, small redirections of our energy and behavior towards the goal, making it a self-fulfilling prophecy.

It’s amazing how many things on our vision boards have come true in the five years since we started this tradition, including both trivial achievements and highly aspirational goals. One of my favorites was when my middle son and I took an improbable trip to witness the greatest Super Bowl ever 2017, an experience I will never forget.

As the boards have sat on our dining room table each January, they have also become a discussion topic with friends and family. Last year, a babysitter was inspired to make her own and recently shared with us that many things on the board had come to fruition.

Knowing what you want and staying aware of it is incredibly powerful, but it’s only part of the equation; it’s also crucial to map out the steps to get there.  One of the best tactics I have found to achieve big goals is to take advantage of the domino effect in goal-setting and master the concept of differentiating between urgent tasks and important ones.

When you combine those strategies, vision becomes reality faster than you’d ever expect.

“First comes thought; then organization of that thought, into ideas and plans; then transformation of those plans into reality. The beginning, as you will observe, is in your imagination”